If you have been injured at work, not only are you probably in pain, but you may also start to worry about what happens next. Will I have to take time off from work? How will I earn a living? Who pays for my medical bills?

Navigating a work injury can be complicated, especially if you are not familiar with Illinois’s workers’ compensation laws. Often injured employees think they are getting workers’ compensation but, in fact, receive an unfair, watered-down version of their benefits. For this reason, it is important to consult an experienced workers’ compensation attorney who can help to ensure that you obtain the full and fair recovery to which you are entitled.

END_OF_DOCUMENT_TOKEN_TO_BE_REPLACED

(a) A physician licensed to practice medicine in all of its branches preparing a permanent partial disability impairment report shall report the level of impairment in writing. The report shall include an evaluation of medically defined and professionally appropriate measurements of impairment that include, but are not limited to: loss of range of motion; loss of strength; measured atrophy of tissue mass consistent with the injury; and any other measurements that establish the nature and extent of the impairment. The most current edition of the American Medical Association’s “Guides to the Evaluation of Permanent Impairment” shall be used by the physician in determining the level of impairment.

(b) In determining the level of permanent partial disability, the Commission shall base its determination on the following factors: (i) the reported level of impairment pursuant to subsection (a); (ii) the occupation of the injured employee; (iii) the age of the employee at the time of the injury; (iv) the employee’s future earning capacity; and (v) evidence of disability corroborated by the treating medical records. No single enumerated factor shall be the sole determinant of disability. In determining the level of disability, the relevance and weight of any factors used in addition to the level of impairment as reported by the physician must be explained in a written order.(Source: P.A. 97-18, eff. 6-28-11.)

END_OF_DOCUMENT_TOKEN_TO_BE_REPLACED

While all lawyers have similar educational backgrounds, they are quite different from each other in terms of years of experience, the kinds of experiences they have had, their temperaments, and the approach they will take to get your case resolved as quickly possible within the needs of your particular situation.  You have a right, and you owe it to yourself, to ask very specific questions to any prospective lawyer about their level of experience, how they would propose your case would be handled, who would be working on your case within the firm, what the firm policy is regarding calling you back when you leave messages for your lawyer, as well as any and all other questions that you may have.  Your lawyer might be able to take things for granted because he or she handles many injury cases, but for you and your family, this is likely to be a new experience, an experience you wish had never happened, and something you have many questions about.

While you might be calling an injury law firm based on the recommendation of a family member, friend or neighbor, it is still a good idea to talk to a lawyer from the firm before you sign a contract.  You have the absolute right to ask about the trial experience of the lawyers for one thing.  At the Chicago personal injury law firm of Kurasch & Klein, for example, the lawyers have a combined total of well over 100 jury trials, as well as hundreds of arbitrations, mediations, and negotiations.  You should ask a lawyer you are interviewing how many contested matters he or she has personally handled, and whether or not he or she will be involved in working on your case.
You should also ask what the firm’s policy is about answering phone calls from clients, and how long it will take to receive a return phone call when you leave a message for your lawyer.  Nothing is more aggravating than trying to reach your lawyer and then not having your call returned promptly.  At Kurasch & Klein it is a firm policy to return all calls as quickly as possible because the lawyers at Kurasch & Klein know that any question you have is an important question.
END_OF_DOCUMENT_TOKEN_TO_BE_REPLACED

Whether by phone, in person, or online, preparing for your initial consultation is important.

Prior to discussing your potential claim with a personal injury attorney, it is valuable to put together a timeline of key events.  Your attorney will almost certainly ask you the following questions:

END_OF_DOCUMENT_TOKEN_TO_BE_REPLACED

The Survival Act of Illinois, 755 ILCS 5/27-6 was enacted to preserve causes of action that accrued and existed before the death of the plaintiff.  Under the Common Law, while the plaintiff was alive after an injury, a claim could be made for medical expenses, lost earning, and pain and suffering.  Prior to the creation of the Survival Act, the law was such that these causes of action died with the plaintiff.  The Survival Act created a way for the representative of the decedent to preserve the actions for medical expenses, lost earnings, and pain and suffering from the time of the occurrence to the time of death.

The Survival Act of Illinois is actually found within the Probate Act.   Section 27-6 (Actions which survive) states, in part, that  in addition to the actions which survive by the common law, the following also survive: …actions to recover damages for an injury to the person(except slander and libel), actions to recovery damages for an injury to real or personal property.

END_OF_DOCUMENT_TOKEN_TO_BE_REPLACED

Dog bite law in Illinois is governed by The Animal Control Act.  The Act actually applies to all animals.  Under 510 ILCS 5/16, “if a dog or other animal, without provocation, attacks, attempts to attack, or injures any person who is peaceably conducting himself or herself in any place where he or she may lawfully be, the owner of such dog or other animal is liable in civil damages to such person for the full amount of the injury proximately caused thereby.”   The law further defines “Owner” as any person having a right of property in an animal, or who keeps or harbors an animal, or who has it in his care, or acts as its custodian, or who knowingly permits a dog to remain on any premises occupied by him or her. Liability extends beyond just the owner, to the person in control of the animcal at the time of the injury. The primary defense to dog bite cases is provocation.

Until to The Animal Control Act, the Common Law required that the owner have prior knowledge of the animal’s dangerous propensities.  The Act eliminated the “one-bite” rule.  Prior to The Animal Control Act, the plaintiff was required to prove that the dog owner either knew, or was negligent in not knowing the dog had a propensity to injure people.  The Act codified the law that it is the person in control of the animal at that moment that must control the animal.

As a result of the Statute, an owner is liable when the animal either attacks OR injures any person.  While the public generally thinks about dog bites, an aggressive violent action is not required.  Any action, which results in injury, is covered by the Statute.   Dog owners have been held liable in situations where a dog chased a bike rider causing the rider to fall, when a dog runs into the road and causes a car wreck, and when a dog greeting a person knocks the person over.

END_OF_DOCUMENT_TOKEN_TO_BE_REPLACED 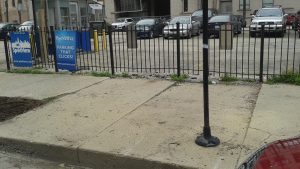 In Illinois, city governments have a duty to maintain their sidewalks in a reasonably safe condition for the pedestrians who use them.  Individuals who are injured in slip and falls (or trip and falls) on a poorly maintained city sidewalk can bring a lawsuit against the city for their injuries.  However, slip and fall claims can be very challenging due to special immunities that exempt the city from liability under certain circumstances.  It is always important to consult a personal injury attorney about your potential claim.

First and foremost, if you are injured on a city sidewalk, you must act quickly.  The Statute of Limitations, or time period for filing a lawsuit, is shortened when the defendant is a governmental entity.  Typically, in Illinois, your personal injury claim must be filed within one year from the date of the injury, or it will be barred, meaning that the law will prevent you from filing your claim.  This does not mean, however, that you have one year to find an attorney.  There is a great deal of investigation and preparation that should be done before filing a lawsuit, much of which takes time.  You want to allow your attorney enough time for them to provide you with the best legal representation possible.  The sooner you contact an attorney, the better.

What should you do if you are injured?

END_OF_DOCUMENT_TOKEN_TO_BE_REPLACED

The Wrongful Death Act of Illinois, 740 ILCS 180/1, 180/2 was created to allow a cause of action or lawsuit brought in the name of a personal representative for the benefit of a widow, next of kin, and heirs, to recover for their pecuniary injuries and damages. In Prendergast v. Cox the Court held that a surviving spouse or lineal next of kin, the law presumes substantial pecuniary damage arising from the relationship alone.

Pecuniary Damages include money, goods, and services received by the next of kin of the deceased. Damages can include loss of consortium by the surviving spouse.  In the event of loss of a child the damages can include the loss of the minor child’s society by the parents.  Unlike damages claims for physical injuries, for a Wrongful Death pecuniary damages from the death of an adult, in determining pecuniary loss, a jury may consider the evidence of the following: END_OF_DOCUMENT_TOKEN_TO_BE_REPLACED